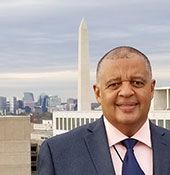 Mike Reese is the host and Chairperson for the Smithsonian National Conference on Cultural Property Protection.

Commander Reese is currently the Acting Director for the Smithsonian Institution’s Office of Protection Services (OPS), where he oversees all 800 OPS employees at 19 museums, the National Zoo, and nine research facilities, as well as SI bureaus, offices, and facilities located in the greater Washington, DC, area; New York City; and Panama. He is the principal advisor to the Secretary of the Smithsonian, as well as the Deputy Secretary, Under Secretaries, and senior management on all major security, protection, and law enforcement issues affecting the Smithsonian Institution. In this role, Commander Reese ensures that the Institution has a comprehensive security program to effectively cope with security issues covering the full gamut of emergencies (e.g., evacuations, thefts, storms, lightning damages, sabotage, poaching, assaults, etc.), ensures the effective use of security personnel as well as safe and secure transport of priceless artifacts, and reviews and approves special procedures to protect high ranking officials and dignitaries. In addition, Commander Reese ensures that supporting programs such as prevention, coordination, and communication within OPS and among other Smithsonian units in response to emergencies such as civil disturbance, terrorist activity, natural disasters, violence in the workplace, and investigations of reported or apparent violations of criminal statutes, are carried out and emergency preparedness planning and responses are in place and effective.

After retiring from Metropolitan Police Department (MPD), Commander Reese was hired as the Deputy Chief of Police for the DC Housing Authority (DCHA) from March 9, 2015 until October 26, 2018. There, he was responsible for the 24-hour day-to-day operations for the agency. DCHA is the largest owner of real estate in Washington, DC. Commander Reese managed budget, staffing, recruiting, training, community outreach, physical security, emergency management, and the coordination of criminal investigations with local, county, and federal law enforcement agencies. He also managed all use of force and public corruption investigations with the U.S. Attorneys Office. The staff consisted of sworn police officers, special police officers, security officers, and civilian support staff.

Commander Reese’s law enforcement career began in 1982 with the Gary, Indiana, police department where he was assigned to patrol and traffic duties. Commander Reese began his career with the MPD in Washington, DC, on September 16, 1985. After completing the training requirements with the MPD, he was assigned to the First District, where he served 3 years as a foot beat, motorcycle beat, and scout car officer. In 1986, he was nominated and selected as “Cop’s Cop” for capturing a violent sexual predator.

In 1988, Commander Reese was transferred to the Youth Division and assigned as an investigator in the Child Abuse Section, where he served as patrol for 9 months, vice sergeant for 2 years and detective sergeant for 2 years. In 1996, he served in the Homicide Branch until he was promoted to lieutenant in 1997 and reassigned to the Third District. His duties at the Third District were all patrol related. In 1998, he was given a collateral duty as commander of the newly created Prostitution Enforcement Unit. The successful performance of the unit was noted by the Chief of Police. Near the end of his tour of duty on December 7, 1998, his birthday, Reese gave himself a nice birthday present by capturing an armed drug dealer, an action also noted by the Chief of Police.

In 1999, the MPD decentralized the majority of the Criminal Investigations Division to include the Homicide Branch and Sex Branch. As a lieutenant, he was selected as the commander for the Fifth District Detective’s office and assisted the agency with embarking on the new investigative strategy. The Fifth District’s Detective office was now responsible for the investigation of property crimes as well as all violent crimes to include homicides and sexual assaults. Soon after, he was promoted to the rank of captain and assigned to the Seventh District. In 2001, the agency centralized investigative units and Commander Reese was selected to assist the agency with centralizing investigative units. Commander Reese has been associated with the successful closure of several major criminal investigations.

In 2011, Commander Reese was promoted to the rank of Commander and transferred to the Second District.

Commander Reese has attained a Bachelor of Science degree from Indiana State University and a master’s degrees from the University of the District of Columbia and the Johns Hopkins University. He is a graduate of the FBI National Academy and currently serves as the Past President on the DC Alumni Chapter Executive Board of the FBI National Academy Associates. Commander Reese has attended numerous training from federal and local agencies, as well as creating partnerships with major corporations to investigate property crimes. Commander Reese is in the final phase of the Executive Leadership Program hosted by the Center for Homeland Defense at the Naval Postgraduate School in Monterey, California.