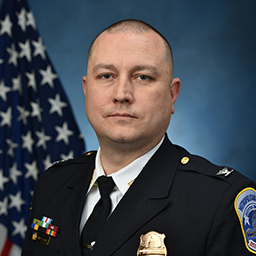 Commander Kyle began his career with the Metropolitan Police Department in 2004, where he was assigned to the Fourth District as an officer. In October 2008, he was promoted to detective/investigator where he was assigned to the Intelligence Branch. In February 2010, he was promoted to sergeant where he managed Police Service Area (PSA) 304, and he served as the first line supervisor to patrol officers.

From 2014 to 2016, Kyle served as a lieutenant, where he oversaw PSA 501, the Fifth District Vice Unit, Crime Suppression Team and Warrant Squad, and the Third and Seventh District Detectives Units. As lieutenant of the Seventh District Detectives Unit, Kyle served as the liaison to the FBI Violent Crimes Task Force, as well as oversaw coordinated joint investigations with the FBI and the Bureau of Arms, Tobacco, Firearms, and Explosives. In 2015, Kyle was named Lieutenant of the Year, and his unit was awarded with Crime Suppression Unit of the Year.

In April 2016, he was promoted to Captain and worked in the Seventh District – Patrol Sector 2 and Sector 3, and then moved to Captain of the Criminal Investigations Division – District Investigations Branch. In 2017, Kyle was named Captain of the Year of the Metropolitan Police Department. Following that, Commander Kyle was named Commander of the Youth and Family Services Division (YFSD) within the Metropolitan Police Department. The YFSD is the division responsible for investigating child abuse and neglect, child sexual abuse and exploitation (including child pornography and prostitution), juvenile missing persons and parental kidnapping, and persons in need of supervision.

In January 2021, Kyle was promoted to Commander of the Criminal Investigations Division where he oversaw investigative units such as the homicide unit, sexual assault unit, and the district detective units.

Commander Kyle holds a bachelor’s degree in political science from Old Dominion University in Norfolk, Virginia. He is also a graduate of the FBI National Academy, Session #264, and the Top Gun Narcotics Investigators School.