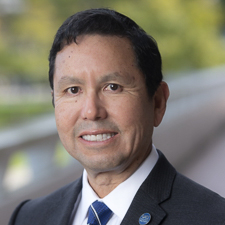 Under Secretary for Administration, Smithsonian Institution

Ronald Cortez is the Smithsonian’s Under Secretary for Administration. He is responsible for the Smithsonian’s management and operations functions supporting the Smithsonian’s 21 museums, including the two new museums in development, the National Museum of the American Latino and the Smithsonian American Women’s History Museum, as well as the National Zoological Park, education centers, research facilities, and multiple cultural centers and libraries. He oversees over 2,000 employees specializing in human and financial resources; information technology; procurement; planning; facilities operations, maintenance, and capital programs; health and safety; security; and more.

Previously, Cortez was the chief financial officer and vice chancellor of finance and administration at the University of California, Irvine (UCI). Starting in 2017, Cortez provided oversight to the university’s $3.5 billion operating budget and a $3 billion capital expenditure budget. At UCI, Cortez created a financial strategy to successfully navigate the pandemic and maintain full employment. He also developed the financial and construction aspects of the UCI Medical Center and the expansion of UCI’s Health Sciences campus, and significantly improved customer service throughout the campus. In recognition of his contributions to UCI, Cortez was honored with the Orange County Business Journal’s CFO of the Year Award in the not-for-profit category in 2020.

Cortez previously worked at San Francisco State University as chief financial officer and vice president of administration and finance. During his tenure from 2013 to 2017, he received the Community Service Award from the School of Public Administration for developing a transparent campus budget. Cortez also served as associate vice chancellor for the University of California, Santa Barbara, from 2008 to 2013. Before his career in higher education, Cortez provided strategic leadership at the County of Santa Barbara as deputy county executive officer and director of general services.

Cortez holds a juris doctor from Santa Barbara College of Law, a Master of Arts in organizational management from the Fielding Graduate University and in public administration from Northern Michigan University, and a Bachelor of Science from San José State University.