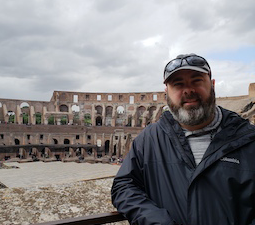 Mr. Carpenter joined the FBI as a Special Agent in 2004 after serving nearly 6 years as a Bomb Technician and Police Officer in South Carolina and a total of nearly 12 years in the U.S. Air Force and Air Force Reserve as an Explosive Ordnance Disposal Technician.

With a long-held passion for art, Mr. Carpenter was accepted to the recently formed FBI Art Crime Team in 2008 and focused his investigative efforts on combatting art and cultural property crimes in the Miami art market.

At the end of 2011, Mr. Carpenter was once again reassigned, this time to the Indianapolis Field Office, where he was the lead Special Agent Bomb Technician and worked on domestic terrorism matters in addition to his art crime investigations. It was during this assignment that Mr. Carpenter initiated and led the FBI’s largest recovery of stolen and looted cultural property in the Bureau’s history, during a landmark investigation of a local antiquity collector in rural Indiana.

In 2016, Mr. Carpenter was promoted to FBI Headquarters to head the national Art Crime Program and supervise the growing FBI Art Crime Team. The first Program Manager to be promoted from within the team, Mr. Carpenter worked hard to build the program from a small, niche initiative within the FBI to a world-recognized cultural property crime unit, driving a 300% increase in investigations and personnel in just 5 years. During that time, the Art Crime Team was recognized for notable successes, including the recovery of a stolen Norman Rockwell painting that had been missing for nearly 40 years, recovering the ruby slippers from the movie The Wizard of Oz -stolen from the Judy Garland Museum, the Eric Spoutz forgery investigation, the Don Miller investigation and many more.

Having led the Art Crime Program for nearly 5.5 years, Mr. Carpenter recently transitioned from the role of Program Manager to that of Senior Special Advisor. In this new capacity, Mr. Carpenter continues to develop capacity and shape strategy for the Art Crime Team, with a focus on training a new cadre of art and cultural property crime investigators within the FBI and abroad.

Often touted by the FBI Office of Public Affairs as the most sought-after program in the FBI by the media, Mr. Carpenter has completed over 100 interviews for television, print, radio, podcast, and other online formats on behalf of the Art Crime Program. Some examples of these interviews include:

Recovering Cultural Property Across the World: Interview with the FBI (artpublikamag.com)

Inside the national gallery of stolen art – The Verge